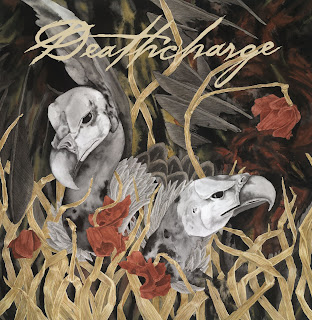 
The devastating debut LP from Portland City's true funeral cult is available again after the initial pressing sold out in 4 days!  Pressed to 12" 180 gram vinyl (45 rpm) with lyric insert and full-color cover artwork by Chanel Adair (Atrocious Madness, Lebenden Toten)  Don't sleep on it this time!  We have no plans to re-press again.  Paypal to unseenforces666@gmail.com
$14 ppd US
$17 ppd Can/Mex
European customers are encouraged to order from our comrades at CLEAR SPOT.
Posted by Unseen Forces at 5:53 PM No comments: 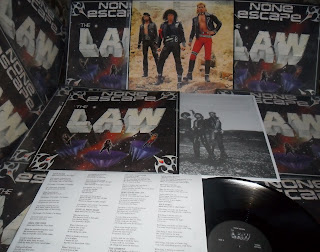 THE LAW
None Escape


Prepare yourself for a kinky blast of vintage volcanic rock! THE LAW was an esoteric "power trio" comprised of former Source Family initiates (think Father Yod and Ya Ho Wa 13) formed in 1979 on a remote ranch in the foothills of Hawaii. The band relocated to Los Angeles in 1983 where they hit the strip and independently released this sole full-length recording before abruptly vanishing in a cloud of leather, spandex, studs and shurikens. Originally limited to 4,000 copies (so the band insists), this heavy slab has been fully remastered with the cooperation of original members and Source Family historian Isis Aquarian. Alternately sleazy and spiritual, mystic and profane, None Escape is the real deal. A lost gem from the early 1980's heavy metal crown has finally been restored!  180 gram vinyl with lyrics and liner notes by founding member Peter Tobin.  Limited to 500!


European customers are encouraged to order from our comrades at CLEAR SPOT and HIGH ROLLER RECORDS. 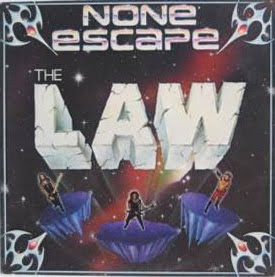 Enjoy this slinking Dionysian tease:
CHILL THE WINE
Posted by Unseen Forces at 9:17 PM No comments: